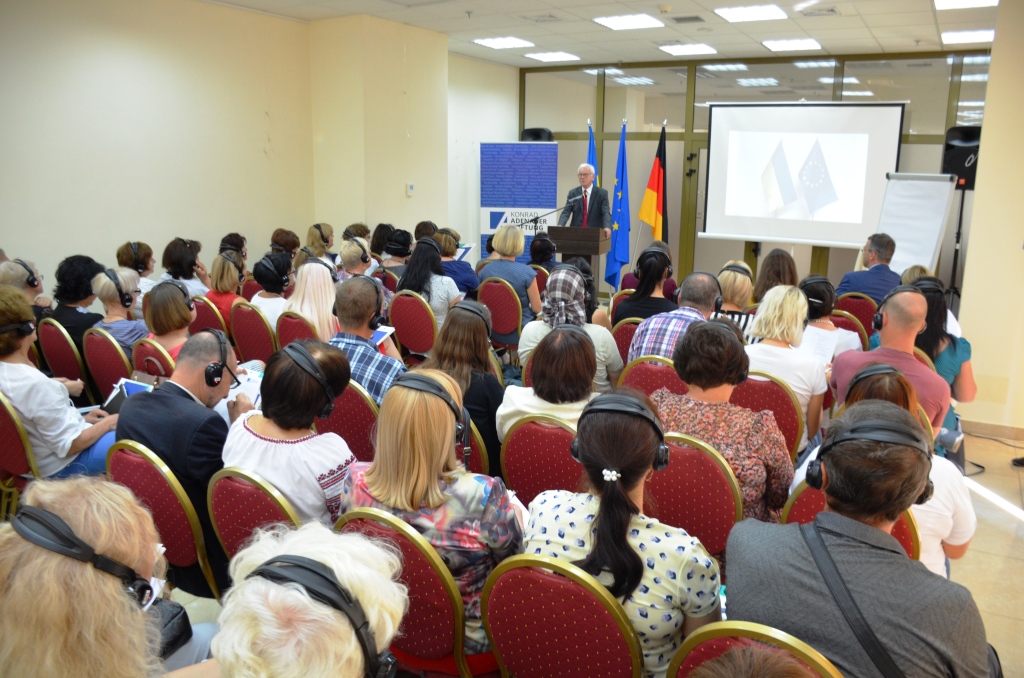 On September 04, the International conference for museum workers “Didactics of Historical Museums: Modern Teaching Methods for Critical Comprehension of History”, organized by the Konrad-Adenauer-Stiftung Office in Ukraine with the support of “Tkuma” Ukrainian Institute for Holocaust Studies started at the “Menorah” Center.

The Konrad-Adenauer-Stiftung (Germany), which has been working in Ukraine for 25 years, together with local partners, contributes to the development of German-Ukrainian relations and is engaged in the preservation of culture and national memory. More than 60 museum workers from all over Ukraine became the conference participants. The aim of the conference is to familiarize participants with modern methods of presenting history in museums and to facilitate the establishment of links between historical and local history museums, primarily, in Eastern Ukraine.

Tim B. Peters, head of the Konrad-Adenauer-Stiftung Office in Ukraine (Kharkiv), who emphasized the importance of establishing Ukrainian-German cooperation in various fields, in particular, in the educational, scientific, museum ones, opened the conference. Dr. Hans-Gert Pöttering, former President of the European Parliament, Chairman of the Board of Trustees of the House of European History constructing, Commissioner of the Konrad Adenauer Stiftung for European Affairs addressed the participants with a keynote speech. Mentioning the Schuman Declaration, he emphasized that European solidarity and mutual understanding remain the European Union’s fundamental principles to this day. He paid special attention to the history of the House of European History creation, opened at the initiative of the European Parliament in Brussels in 2017. Actually, the idea of creating this House belonged to Mr. Pöttering, who expressed it more than ten years ago.

On September 05, the conference was continued with the following activities: scientists, public figures had a guided tour to Museum “Jewish Memory and Holocaust in Ukraine”, “Round table” on historical memory, reports and discussions.