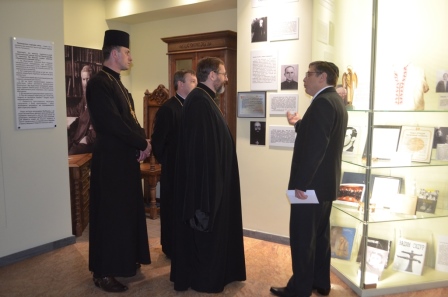 On November 30, 2016 His Beatitude Sviatoslav Shevchuk, Father and Head of the Ukrainian Greek Catholic Church visited Museum “Jewish Memory and Holocaust in Ukraine”. He and members of the Committee for Commemoration of the Martyr Blessed Omelian Kovch has come to Dnipro to hand out Martyr Blessed Omelian Kovch Reward for the personal example of sacrifice and humanism to benefactors, volunteers, doctors, army men and public figures.

Guided tour was conducted by Dr. Igor Shchupak, Director of “Tkuma” Institute and the Holocaust Museum. His Beatitude reviewed exhibitions dedicated to the Jewish spiritual world and traditions of Judaism, and special exhibition dedicated to the Righteous among the Nations, which, by the way, is the first exhibition in Ukraine where separate unit is dedicated to Blessed Omelian Kovch – Martyr of UGCC. During the Nazi occupation he helped Jews, saved more than ten people, and later died in the death camp Majdanek. Part of the exhibition includes materials about the feat of Metropolitan Andrey Sheptytsky, who during the Holocaust saved about 200 Jews.