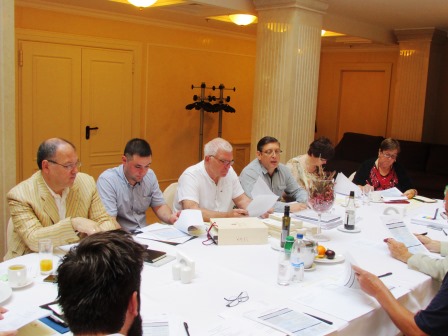 June 30 and July 1, 2016 within the framework of preparations for the project dedicated to the 75th anniversary of Babyn Yar tragedy, working meeting of UJE (Ukrainian Jewish Encounter) and members of the organizing committee responsible for different areas of program of large-scale events in September 2016 was conducted.

Dr. Igor Shchupak, “Tkuma” Ukrainian Institute for Holocaust Studies and Museum “Jewish Memory and Holocaust in Ukraine” director, coordinator of the Youth Project, informed that hundreds of young activists from the US, Canada and Europe will attend the Youth Forum. “We will clarify the question of historical memory without which it is impossible to understand the present and think about the future. It is important for the young generation, which will equip the future. We will also discuss issues of cooperation between different ethnic communities, culture, politics, philosophy, etc.,” he explained.

Dr. Lyudmila Hrynevych, Senior Research Fellow at the Museum of History of Ukraine, Director of the Holodomor Research and Education Center, Chairperson for Public Symposium, coeditor of the memorial book, informed that the symposium will be held on September 26-28. Not only historians but also political scientists, art and literary critics, philosophers from around the world will participate in the expert discussion.

Dr. Vitaliy Nakhmanovych, Executive Secretary of the Public Committee for Commemoration of Babyn Yar Victims, added that based on the results of the architectural competition of ideas for organizing a memorial park “Babyn Yar,” seven best projects will be presented. All visitors will have a possibility to learn about these projects at the Ukrainian House. On September 28, three best works will be presented with the participation of their authors coming from Slovenia, the USA, France and Colombia.

More details on the project you can find here: http://tkuma.dp.ua/index.php/ua/2015-02-17-11-50-31/anonsy/1068-zaproshuemo-vzyati-uchast-u-mizhnarodnomu-molodizhnomu-proekti-do-75-richchya-tragediji-babinogo-yaru