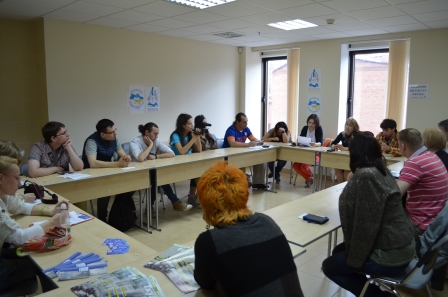 On June 8, 2016 within the framework of the project “See Ukraine with Your Own Eyes” group of Russian activists visited “Tkuma” Institute and Museum “Jewish Memory and Holocaust in Ukraine”. The project is organized by Russian Center “The Image of the Future” in cooperation with Internews Ukraine.

Journalists, bloggers, public figures from Moscow and St.Petersburg became participants of the program.

The visit started with the guided tour through the exhibition of the Holocaust Museum conducted by Dr. Denys Shatalov. Alongside the halls dedicated to the history and culture of the Jewish people, visitors had the opportunity to review the exhibits of new unit of the exhibition “The Tragedies of the 20th c.”, devoted to the events Euromaidan, Revolution of dignity, ATO and Russian aggression against Ukraine.

After the tour, the Russian civic activists were able to talk with research staff of “Tkuma” Institute and the Holocaust Museum. During a lively conversation Russians were interested in many aspects of contemporary life in Ukraine, such as Dnipropetrovsk Jewish Community role in the events of Euromaidan, Revolution of dignity; ethnic relations in the city and in the country as a whole, policy of decommunisation, etc.