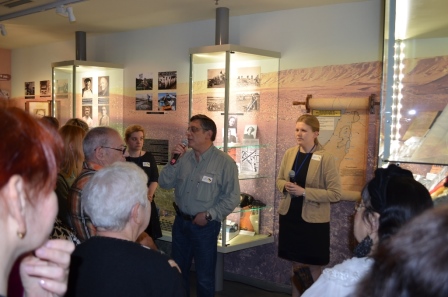 On May 30, 2016 the opening of Ukraine’s first permanent exhibition “Establishment of the State of Israel” was conducted at Museum “Jewish Memory and Holocaust in Ukraine” (Dnipro).

“The opening of this exhibition is very relevant today as many of us understand that the fate of modern Ukraine is very similar to Israeli experience,” noted Dr. Igor Shchupak, “Tkuma” Ukrainian Institute for Holocaust Studies and Museum “Jewish Memory and Holocaust in Ukraine” Director, who opened the exhibition. “If during its development Israel managed to defend its independence, create a powerful army and ensure high standards of living, so Ukraine also can have and should have such future”.

The opening ceremony was joined by: Vyacheslav Smotkin, Second Secretary of the Embassy of Israel, Director of the Israeli Cultural Center in Dnipro; Matthias Koch, Deputy Consul General of Germany in Dnipro; Dr. Oleh Repan, ATO veteran, Associate Professor of Faculty of History of Dnipropetrovsk National University; Oleh Rostovstev, Advisor to the Mayor. The first guided tour for visitors was held by “Tkuma” Institute and the Holocaust Museum Research Associates Iryna Radchenko and Tetyana Selyutina.

The exhibition contains materials that tell about the wave of repatriation to Israel, the creation of the first agricultural settlements as well as the successes and achievements of modern Israel. Visitors can see unique artifacts, documents and photographs devoted to the history of the State of Israel, from the time of the British mandate in 1922; samples of weapon that was used by Israeli soldiers during the War for Independence, the Sinai War and the Yom Kippur War; money and stamps of 1950 - 1980s and much more.