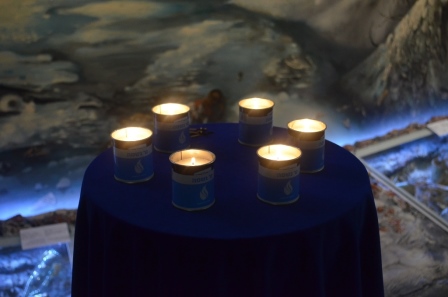 On January 27, 2016 Museum “Jewish Memory and Holocaust in Ukraine” hosted the Holocaust Memorial Ceremony. By the decision of the UN General Assembly dated November 1, 2005 each year International Holocaust Remembrance Day in marked in January 27. This day in 1945 the troops of the First Ukrainian Front liberated the Polish town of Oświęcim, where Auschwitz-Birkenau death camp, terrible symbol of the Holocaust and Nazi crimes during World War II, was located.

“On this sad day, we pay tribute to the memory of the victims and fighters against Nazism”, noted Dr. Igor Shchupak, “Tkuma” Ukrainian Institute for Holocaust Studies and Museum “Jewish Memory and Holocaust in Ukraine” Director, who opened a memorial ceremony.

Six candles in memory of the six million Jews killed were lit by Shmuel Kaminezkiy, Chief Rabbi of Dnipropetrovsk city and region; Borys Filatov, Dnipropetrovsk Mayor; Wolfgang Moessinger, Consul General of the Federal Republic of Germany in Dnipropetrovsk; Vyacheslav Smotkin, Second Secretary of the Embassy of Israel in Ukraine; Yonatan Leifer, Director of JDC Programs in Eastern Ukraine; Solomon Flaks, Chairman of the Council of Jewish veterans and participants of military operations of Dnipropetrovsk.

During the ceremony Dilfuza Hlushchenko, Head of “Tkuma” institute Research Department, presented unique exhibits donated by Hryhoriy Dolyar, person who went through Mogyliv-Podilsk ghetto and survived shooting. In particular, it was old Torah scroll that was saved in the ghetto and which helped to save lives. One more thing is Chuppah, which was also used in the ghetto.

In memory of the six million Jews killed during the Holocaust Oleksandr Fridkis, Executive Officer of Jewish Religious Community, read memorial prayer. The ceremony ended with a moment of silence.