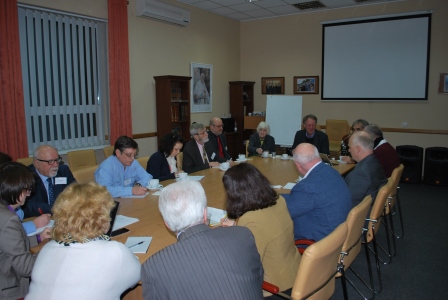 During the session historians discussed the work plan of the Commission for the period 2016 - 2018, defined the main directions of its activities including its main vector of assisting young researchers of History of Ukrainian-German relations and Holocaust. Historians negotiated regarding the organization of annual summer school, which will take place in Germany and Ukraine alternatively. They also discussed the possibility of exchanging students and young scholars between universities and scholarly institutions of the two countries.

Dr. І. Shchupak announced complex of large-scale events of UJE and “Tkuma” Institute, which will take place during commemoration of the 75th anniversary of Babyn Yar tragedy in Kyiv this year. German colleagues expressed interest in the possibility of German students’ participation in a number of youth cultural, educational and artistic events that would take place in Ukrainian capital in September 2016.

Also, members of the German-Ukrainian Commission discussed the structure of the official electronic pages that would become an information platform for Commission and, at the same time, will allow the exchange of useful information, editions and archival sources for a wide range of historians and History teachers.