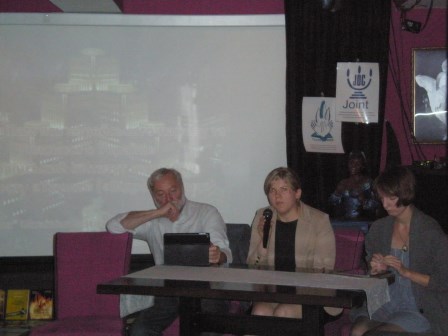 On September 23-27 Ivano-Frankivsk hosted the 13 International MitOst Festival. MitOst is a German NGO that is interested in inter-cultural exchanges and development of civil society in Europe and neighboring regions. This is a kind of platform for dialogue between people of different nationalities, cultures and religions to exchange experience in various areas of society (from the current political situation in certain countries to the discussions of new trends in contemporary music).

Each year MitOst holds four-day forum with various cultural and educational formats and space for dialogue and reflections.

Within the framework of the Festival on September 24 discussion “Jewish Cultural and Historical Heritage in Europe” was conducted. Josef Zissels (Museum of Bukovinian Jewish History and Culture),Vladyslava Moskalets (Ukrainian Catholic University),Iryna Radchenko and Tetiana Selyutina(“Tkuma” Ukrainian Institute for Holocaust Studies),Anna Chebotariova(Center for Urban History of East Central Europe) participated in the discussion.

After the presentations, each participant had the opportunity to express his/her view on topical issues of history and present time, including:

- Holocaust and Jewish history presentation in Ukrainian educational institutions (schools, universities). At what level is this topic now? What can museum or scientific institution offer?

- Is it possible to speak of Jewish, Ukrainian, Russian, Armenian and other heritage, given the close relationship between different cultures, religions and mentalities in Ukraine?

- Current events in Ukraine, Ukrainian-Russian war and the Jewish question (in particular aspects of anti-Semitism).

The festival also hosted demonstration of the film “The People from Ukraine Who Survived the Holocaust”, organized by the Austrian Association “Trans.History”. The project aims to promote civil society in Ukraine, first of all - by studying Ukrainian-Jewish history of the twentieth century.