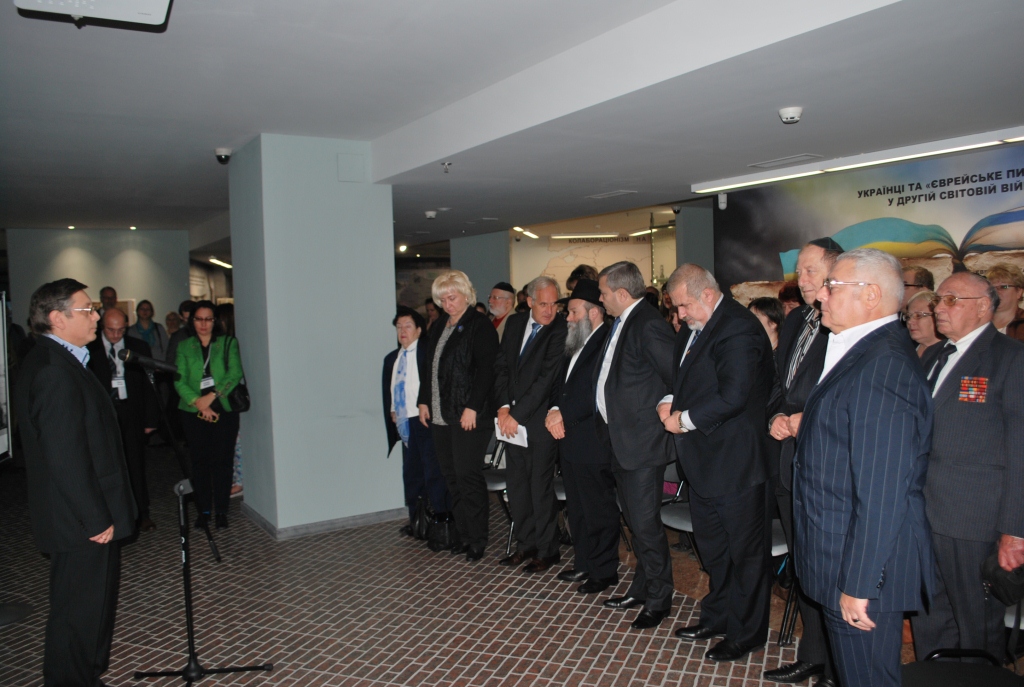 On September 29, memorial ceremony dedicated to the 73rd anniversary of the executions of Jews in Babi Yar was held at Museum “Jewish Memory and Holocaust in Ukraine”. Traditional lighting of candles in memory of six millions of  Jews killed was carried out near the panorama “Babi Yar – Babi Yars of Ukraine”, which is an important part of the Museum. The ceremony was attended by the community leaders, scholars from Ukraine and from abroad, participants and guests of the Final of the XIth International Contest “Lessons of War and the Holocaust – Lessons of Tolerance”, members of the Jewish community, representatives of media. Symbolically, the memorable event was attended by representatives of the Armenian and Tatar peoples, whose history is also tragic – mass murder, repressions, deportations.

Different public and religious figures addressed to the audience, among them: Shmuel Kaminezki, Chief Rabbi of Dnipropetrovsk city and region; Detlef Voltaire, Consul General of Germany in Donetsk; Borys Treigerman, Adviser to the Governor of Dnipropetrovsk region; Refat Chubarov, the Head of the Crimean Tatar Mejlis; Robert Tatoyan, Head of the Department of Collecting Data on victims of genocide of Museum-Institute of Armenian Genocide at National Academies of Sciences the Republic of Armenia; Solomon Flaks, Head of the Jewish Veterans of Dnipropetrovsk; Victor Bonyak, Head of “Rubizh-Dnipro” search organization, soldier of “Aydar”, the 24th battalion of territorial defense of Ministry of Defense of Ukraine; Malkhaz Tsirikidze, Dean of the Faculty of Humanities at Iakob Gogebashvili Telavi State University; Irina Shyhova, Director of the Museum of Jewish Heritage in Moldova; Hinrich Kaasmann, Head of the German Friends of Yad Vashem in Jerusalem, the son of Wehrmacht officer. It was a very informal official ceremony. Despite the presence of high officials, the atmosphere was warm and relaxed and it inspired to sincere spiritual impulses. At this memorable day, the son of a German officer bowed his head in front of the Soviet war veterans, and representatives of Ukrainian, Tatar, Jewish and German people shook each other’s hands. At the end of the ceremony all attendants honored the memory of Holocaust victims with a minute of silence.