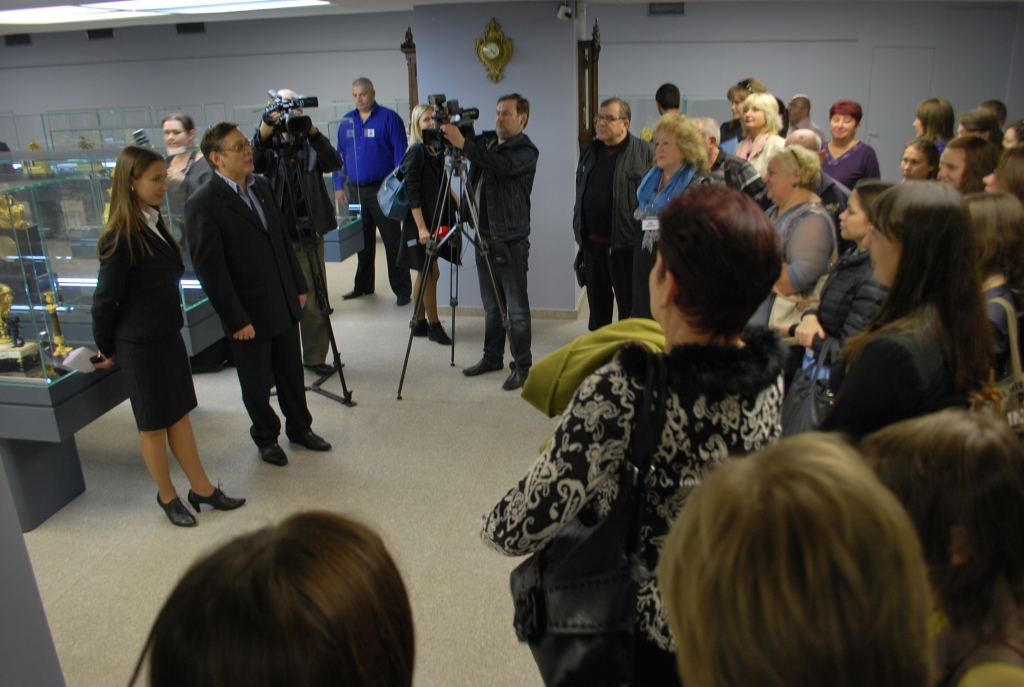 On September 29, a collection of clocks of gilded bronze and wood dated by end of the XVIII - beginning of XX century was exposed in a new hall of Museum “Jewish Memory and Holocaust in Ukraine”. Most of them were made in France, which in the XVIII - XIX c. turned into the center of the world production of luxury goods, including clocks of gilded bronze. The collection is donated to the Museum by Igor Kolomoisky, Governor of Dnipropetrovsk region.

The first visitors of the hall were finalists of the XIth International Contest “Lessons of War and the Holocaust – Lessons of Tolerance”, representatives of the Dnipropetrovsk Jewish Community and mass media. Tour of the hall was conducted by Dr. Oleksandra Leonova, Museum “Jewish Memory and Holocaust in Ukraine” Head of the Research Department.

“Clocks Which Saw the Past” – this is the eloquent title of the collection. The clocks take the principal place in the exhibition, but apart from them there are other works of art in the collection – candlesticks, candelabras and statues, some of which were created as part of the interior headset, in addition to the clock, while others are individual objects of art and historical interest.

The collection includes three types of clocks: for fireplaces, carriages and the walls. Most of them are made in the Empire style, but there are also samples of the Baroque, Rococo, and Art Deco. Specific details of antique decor, heroic allegories, and large-scale sculptures of the history of the Roman Empire are characteristic features of clocks in the Empire style represented in the collection. For the creation of the clocks presented different materials were used: bronze, gold, silver, mercury, ceramic, porcelain, marble, cobalt, wood, glass, and etc. The creation of these clocks sometimes took years and the whole group of workers involved to work. Today the exhibition hall numbers over a hundred exhibits. Dnipropetrovsk Jewish Community web-site has quoted Director of the Museum: “Responding to journalists’ questions about work of the exhibition, Dr. Igor Shchupak said that it will work “as long as Ukraine is independent, that is always” and added that the exhibition will be expanded as other exhibits of the collection are planned to be exhibited”.