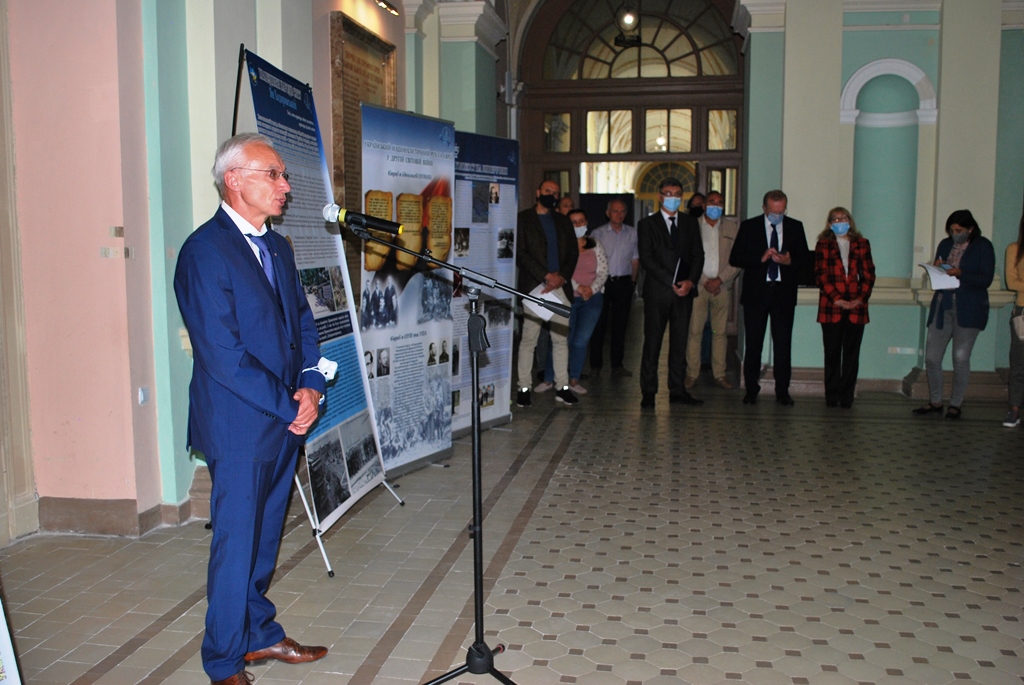 On September 9, the exhibition "Ukrainian rescuers of Jews during World War II" was opened in the main building of the Lviv Polytechnic National University. It presents banners developed by “Tkuma” Institute and dedicated to the Righteous Among the Nations.

During the grand opening, the first vice-rector of Lviv Polytechnic Prof. Oleh Matviyko stressed the connection between the genocides of the 20th century that happened in Ukraine. Oleh Paska, Director of the Department of Education and Science of the Lviv Regional State Administration, said about the importance of educating Ukrainian youth in the spirit of tolerance and interethnic dialogue and expressed hope that this would be facilitated by the open exhibition. Director of the Regional Research and Education Center, Ph.D. Bohdan Levik reminded that the topic of rescuing Jews, the feat of the Righteous Among the Nations is directly related to the Lviv region, where the head of the Ukrainian Greek Catholic Church Metropolitan Andrey Sheptytsky organized the rescue of Jews in Univ Lavra and other church and secular institutions.

Dr. Olena Ishchenko, researcher at “Tkuma” Institute, told the story of the rescue of Lviv Jews in Dnipropetrovsk by Yan Khodorovsky, a graduate of Lviv Polytechnic, the Righteous Among the Nations. She also drew the attention of those present to the initiative of "Tkuma" to rename the streets in honor of the Ukrainian Righteous and its implementation in the Dnipropetrovsk region, where 14 streets were renamed in 13 settlements.

During the opening ceremony of the exhibition the music of F. Handel, K. Jenkins, M. Skoryk performed by the folk chamber orchestra of Lviv Polytechnic “Polyphony” was heard.

At the end of the opening ceremony, Olena Ishchenko gave a lecture for students and teachers of the University “Rescuers of Jews during the Holocaust: the regional dimension”.

On the same day, scientific and methodological publications of “Tkuma” Institute were presented in the library of Lviv Polytechnic. The event was moderated by the director of the library, Dr. Andriy Andrusiv, who gave the guests a tour of the bookstores where old prints are stored.

The exhibition “Ukrainian rescues of Jews” will be at the university for a month, and then it will be open to students and scholars of other educational institutions in Lviv.