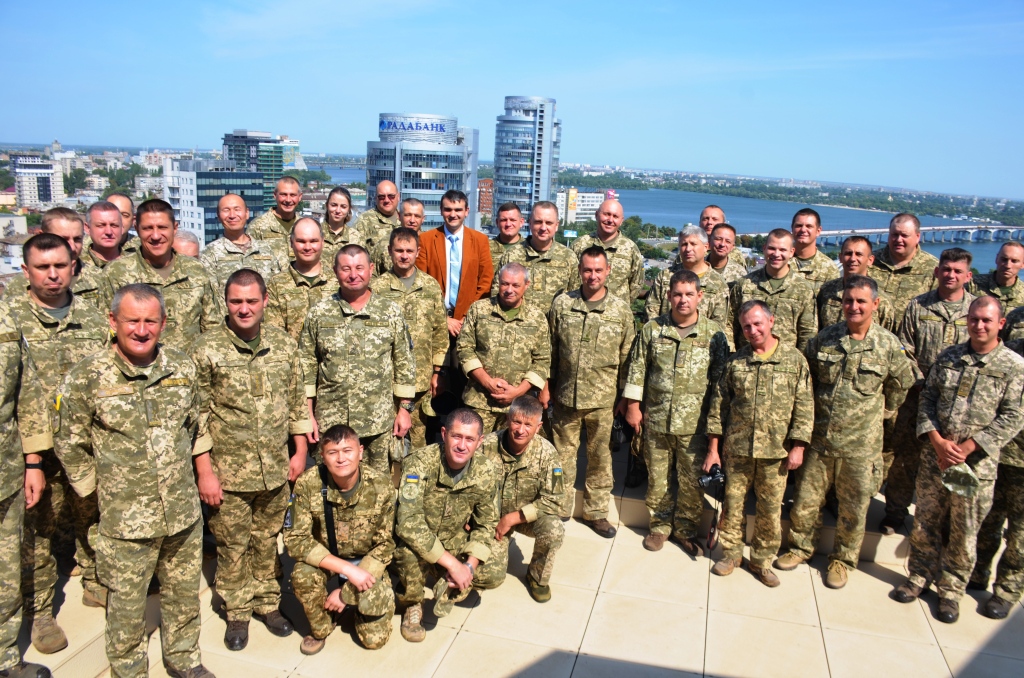 On August 08, we had the honor to welcome officers of the Armed Forces of Ukraine – participants of the methodological meeting that was held in Dnipro this week at “Tkuma: Institute and Museum “Jewish Memory and Holocaust in Ukraine”. Questions of moral and psychological support for the actions of the Armed Forces in the course of fulfilling the tasks of counteracting of Russian aggression; improving the effectiveness of advocacy work etc. were discussed during the meeting.

Among others, there was a command staff from different regions of Ukraine, including higher educational institutions, including Kharkiv Air Force University named after Ivan Kozhedub. The day before the officers visited the Museum “Civic feat of Dnipropetrovsk in ATO events”, and afterwards they visited us. Dr. Yehor Vradii, deputy director and researcher Valentyn Rybalka, held the guided tour at the Holocaust Museum for honored guests. They discussed the history of World War II and the Holocaust, the memory of these events in Ukraine and the world, the behavior of people during the war and the exploits of the Righteous among the nations. Particular attention was paid to the exhibition dedicated to the Revolution of Dignity and the modern war of Russia against Ukraine.

After the guided tour, the officers had the opportunity to meet with Dr. Igor Shchupak. During the meeting, they talked about the connection of the past with the present, historical myths and their impact on people's minds. They also discussed the importance of systematic educational activities for youth, in particular, on patriotic education – including for cadets of military schools of Ukraine. We have already agreed on joint educational activities at our Museum – our cooperation to be continued!