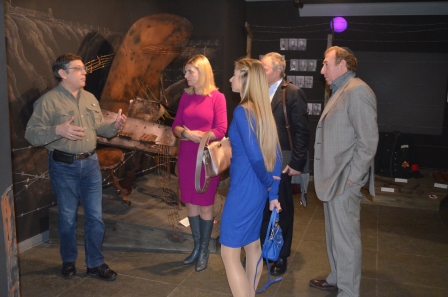 On November 17, 2016 Dnipro Jewish community was visited by Nataša Prah, Ambassador Extraordinary and Plenipotentiary of the Republic of Slovenia. Ambassador was accompanied by Anatoly Bondarenko, Honorary Consul of Republic of Slovenia in Kharkiv, and Leonid Sklyar, Member of the Board of Trustees of Dnipro Jewish community. After meeting with Shmuel Kaminezki, Chief Rabbi of Dnipro city and region, honored guests visited Museum “Jewish Memory and Holocaust in Ukraine”. Guided tour around the Museum was conducted by Dr. Igor Shchupak, “Tkuma” Institute and the Holocaust Museum Director.

Igor Shchupak noted: “Ambassador showed great interest to our Museum and the topic it is dedicated to because her relatives were among those who rescued Jews from Nazi persecution, those are gratefully called Righteous Among the Nations”.