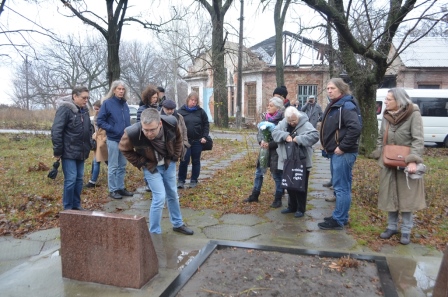 November 13–14, 2016 saw research and commemorative visit to Dnipro of German historians and public activists from Wuppertal.

The group firstly visited Kyiv (including – Babyn Yar), and then came to our city. According to the project participants, the visit was stemmed from the desire to learn more about the Nazi occupation of Ukraine and in particular about crimes committed by Nazi mobile military groups – Einsatzgruppen. The group also wanted to visit local memorials at the places of mass shootings and pay tribute to the victims of Nazi policies.

Participants of the project were joined by Lilo Bhatia – daughter of a Nazi officer and Einsatzkommando C6 member Wilhelm Ober. During the occupation of Dnipropetrovsk he took part in shootings of people at the Ihern village (currently modern housing estate). According to archive documents, “during the German occupation of the Ihren village of Dnipropetrovsk suburban area, mass killing of 1300 patients of Ihren psychiatric hospital was committed by German occupation authorities, with the participation of medical personnel from among Soviet citizens” (State Archive of Dnipro region). During the Nazi occupation Ihern concentration camp # 956 was located on the territory of psychiatric hospital. Prisoners from this camp were then sent to Dora concentration camp (Germany). Several thousands of prisoners of this camp, including two rabbis were killed by the Nazis.

Today on the territory of the hospital two memorials can be found at the site of mass killings of prisoners of war and patients in 1941–43. Within the framework of visit to Dnipro the group of German historians and public activists visited the territory of Ihren psychiatric hospital and held a ceremony in memory of the victims of Nazi extermination policy.

Later several important events were organized: meeting with Holocaust survivals; meeting with the chief rabbi of Dnipro city and region Shmuel Kaminezki; meeting with historians to discuss various aspects of the history and memorialization of World War II in Ukraine and Germany, the problem of access to archival information, etc.

At the end each participant received publications released by “Tkuma” Institute, dedicated to the history of Ukraine during Nazi occupation and the Holocaust. The visitors were impressed by the educational, and research programs, conducted by “Tkuma” Institute and the Holocaust Museum and expressed the initiative to pass this information and knowledge to young generation in Germany.