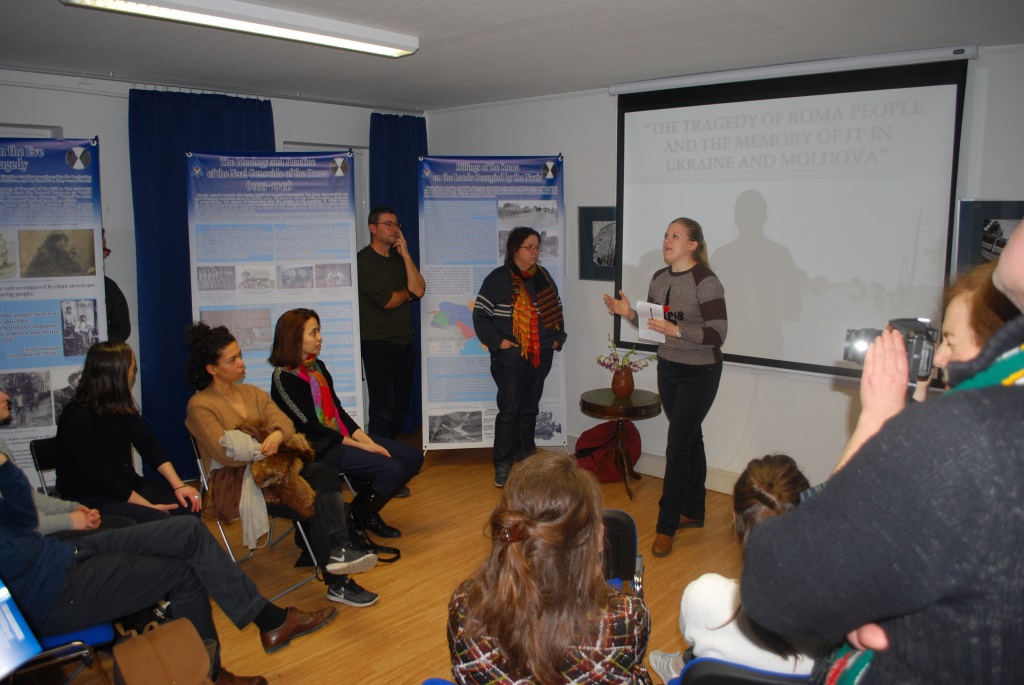 On February 15, 2018 The European Janusz Korczak Academy (Berlin, Germany) hosted presentation of the mobile exhibition “Tragedy of the Roma people in Ukraine and Moldova”, created within the framework of “Tkuma” Institute project supported by IHRA. “Tkuma” Institute and the Holocaust Museum Research Associates Iryna Radchenko and Maryna Strilchuk presented banners devoted to the genocide of the Roma during the Second World War and talked about the concept and general idea of the exhibition. The presentation was attended by several dozens of people - scholars and museum staff, politicians and media representatives, students and postgraduates from Germany, Poland, Ukraine and Russia. The topic aroused considerable interest of those present that was proved by the active discussion taking place within the framework of the event.

One of the visitors, Peter Liesegang, Berlin expert on Eastern Europe, shared his impression saying that the exhibition is very interesting and important to be seen by as many civil society representatives as possible in Berlin and in Germany. Historian and project coordinator The European Janusz Korczak Academy Oleksandra Bienert, who led the discussion, emphasized that this exhibition is a positive signal – there are already several research projects in Ukraine that are dealing with the history of the Roma genocide during the Second World War on the territory of Ukraine. In her comments for the radio “Chirikli”, Ms. Bienert shared the impression that both in Germany and Ukraine the fate of the Roma during the Second World War is still not know enough, but the situation is changing, more and more research initiatives are emerging as well as educational practices of both research institutes and the Roma themselves.

We express our sincere gratitude to Ella Nilova and Oleksandra Bienert for the hospitality and opportunity to present a presentation on the basis of The European Janusz Korczak Academy.

On February 16, 2018 “Tkuma” Institute and the Holocaust Museum staff met researchers of Memorial to the murdered Jews of Europe (Berlin. Germany). During the meeting, mobile exhibition on the tragedy of the Roma people in Ukraine and Moldova was presented, as well as ways of future cooperation in the scholarly and educational spheres were discussed.