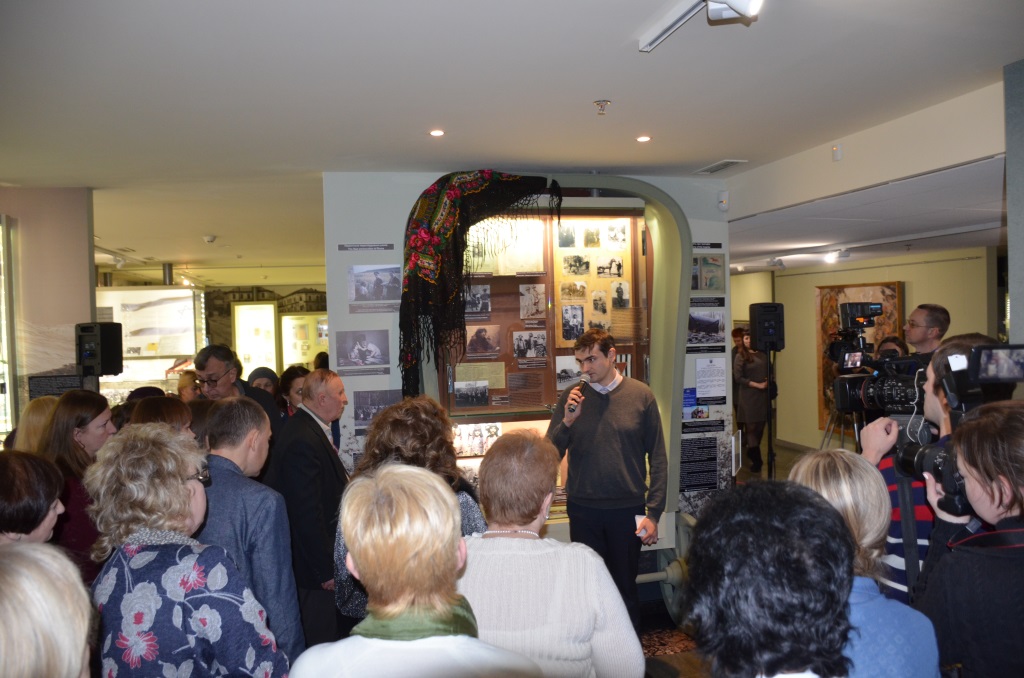 On January 29, 2018 Museum “Jewish Memory and Holocaust in Ukraine” the opening of the exhibition “Tragedy of the Roma people in Ukraine and Moldova”. This is the first permanent exhibition in Ukraine, dedicated to the genocide of Roma during the Second World War.

The fate of the Roma during World War II was similar to that of Jews. The Nazi occupation authorities subjected the Roma population to internment, forced labor and mass extermination. Tens of thousands of Roma were killed in the Nazi occupied territories of the Soviet Union, thousands more – in the Auschwitz-Birkenau, Chelmno, Belzec, Sobibor, Treblinka centers of extermination. According to various estimates, up to 500 thousand people became victims of the Roma genocide during World War II, in other words – more than 25% of the pre-war Roma population of Europe.

Opening of the exhibition was joined by Dr. Iegor Vradii, one of the creators of the exhibitions; Wolfgang Mössinger, Consul General of the Federal Republic of Germany in Dnipro; Raisa Yevtushenko, Chief Specialist of the Department of General Secondary and Preschool Education of the Ministry of Education and Science of Ukraine; Anton Demura, Deputy Director of the Department of Education and Science of Dnipropetrovsk Regional State Administration, Ivan Patryliak, Dean of the Historical Faculty of T. Shevchenko Kyiv National University; Dr. Natalya Zinevych, Roman history researcher, Senior Researcher at the Institute of Ukrainian Archaeography and Source Studies of National Academy of Sciences, current member of European Academic Network on Romani Studies; Dr. Igor Shchupak, director of “Tkuma” Ukrainian Institute for Holocaust Studies and Museum “Jewish Memory and Holocaust in Ukraine”. The first tour was held by Dr. Denys Shatalov, Deputy Head of Research Department of Museum “Jewish Memory and Holocaust in Ukraine”, one of the creators of the exhibitions.

Unique exhibits, archival documents, family photos will tell about the fate of the Roma population of Ukraine and Moldova before and during the war, in particular, about the “solution of Roma question” by the occupation authorities in these territories.

The general concept of exhibitions includes the story of the tragedy of the Roma people in Ukraine and Moldova in the context of pre-war history. So, exhibition the begins (in its mobile and museum versions) with a story about anti-Roma policies of the Nazis on the eve and during the Second World War. The tragedy of the Ukrainian Roma can best be understood if the visitors to the exhibition learn about their life before the war, which often did not meet the common anti-Roma stereotypes. The story of the persecution and murder of the Roma by occupiers focuses on Hungarian, Romanian and Nazi anti-Roma politics on the lands of Ukraine, which differed in the form of persecution and the methods of killings.

The creation of the Holocaust Museum exhibition also embodies the idea of an artistic story about the tragedy – not only through exhibits and texts, but also through the symbolic design of a showcase.