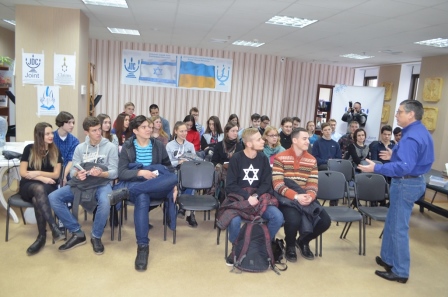 On November 20, 2016 World Annual “Day of Jewish Knowledge” was conducted. Traditionally, the main events were held in Jewish Cultural Center “Solomonika” under the support of JDC and in partnership with “Hillel” Youth Organization. Educational activities of that day also included regular session of the Sunday Club conducted by Dr. Igor Shchupak, “Tkuma” Institute and the Holocaust Museum director.

The topic of the session was “Cross Dialogue: Questions and Answers about the Holocaust”. During the club session participants had an opportunity to ask questions on any topic related to the Holocaust history. Youth who made up the bulk of the Club participants, was particularly interested in issues of rescue of Jews during World War II and questions of historical memory of the Holocaust, the Holodomor and other genocides. Why is Metropolitan Andrey Sheptytsky still not recognized as Righteous Among the Nations, although he rescued 200 Jews in Western Ukraine? How did Nazi propaganda justify the need for “the final solution of the Jewish question”? Did the situation of Jews during World War II vary in Nazi-occupied areas of Western and Eastern Europe? These were the questions raised.

At the end of session the most active young people received as a gift “Tkuma: Institute publications devoted to Jewish history and the Holocaust.