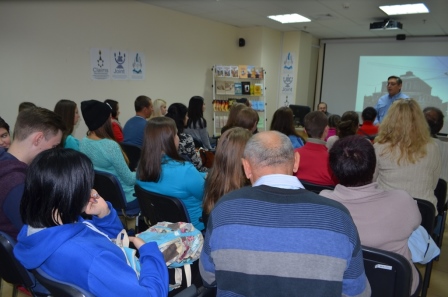 He stressed that after destruction of the Second Temple Jewish communities worldwide needed an institute, which would at least partially serve as the Temple, the foundation of former Jewish life in the land of Israel. There wasn’t any physical possibility to organize a united center for all Jews. In different regions within unified Halacha each community developed specific customs, sets of prayer, and even the style of clothing. And each community built its temporary “Small Temple” as synagogue, hoping sooner or later to come to the permanent Temple. For many years synagogue served as social and spiritual center for Jewish community.

After the Sunday Club Museum “Jewish Memory and Holocaust in Ukraine” hosted opening of the photo exhibition. Participants were able to learn more about history, architecture, interior and exterior Ukrainian synagogues.