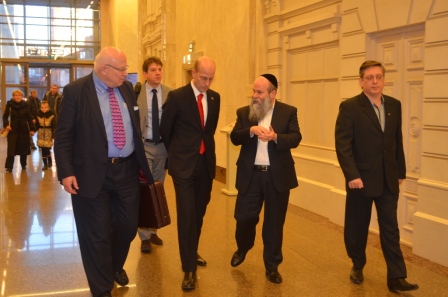 During the visit, meeting with the Shmuel Kaminezki, Chief Rabbi of Dnipropetrovsk and the region, was held. At the meeting wide range issues related to the current situation in Ukraine, strengthening of interstate relations, prospects of cultural and humanitarian cooperation and possibilities of joint projects were discussed.

After meeting German diplomatic mission visited the Museum “Jewish Memory and Holocaust in Ukraine” and got acquainted with its exhibitions. Dr.Igor Shchupak, “Tkuma” Institute and the Holocaust Museum Director, conducted the guided tour.

During the guided tour the Ambassador learned about research and educational activities of institutions, cooperation with partners from Germany and other countries, joint work with teachers and scholars, students and veterans, with Jewish, Ukrainian, Polish, Crimean Tatar and other organizations. German diplomat met Associate Professor of Dnipropetrovsk National University and ATO veteran Dr. Oleh Repan and Adam Osmayev, commander of the Chechen battalion named after Dzhokhar Dudayev. The German guests learned about specific examples of the participation of soldiers and units of the regular Russian army in the war against Ukraine. The guests stressed that this war is not against Russia or Russians, but for the freedom and independence of Ukraine, for the European and the human choice of the Ukrainian people.