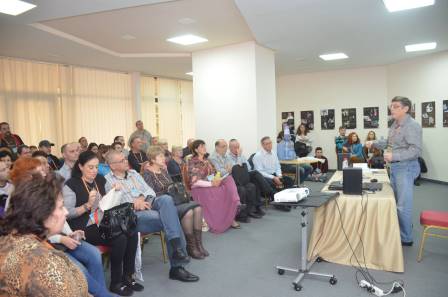 November 5-8, 2015 Lviv hosted International Conference Limmud Ukraine 2015. For more than 30 years the annual conferences are held around the world gathering from several hundred to thousands of participants. In 2008 Limud was held in Ukraine for the first time.

Dr Igor Shchupak presented several lectures and reports. During the first day of Limmud todether with Lyudmyla Hrynevych he held a lecture-discussion on "Mechanisms of the Holodomor and the Holocaust: Language of Hatred in Stalin's and Hitler's Propaganda of 1920-1940's". Together with Natalya Fedushchak presentation of the film "Rescued by Sheptytsky" and discussion on Righteous Among the Nations and motives of his behavior was conducted.

Another session held by Dr. Igor Shchupak was devoted to historical myths. How do they conflict with the facts and what new myths are born in Ukraine? Why do Ukrainian textbooks only now start to describe the history of Jews during the Crusades and the Inquisition, the role of Jews in the Islamic world and their exile from Spain? How is modern history used in modern propaganda? Participants had an opportunity to discuss these issues during the lecture-conversation.

Also, all interested were invited to video guided tour around Museum "Jewish Memory and Holocaust in Ukraine".