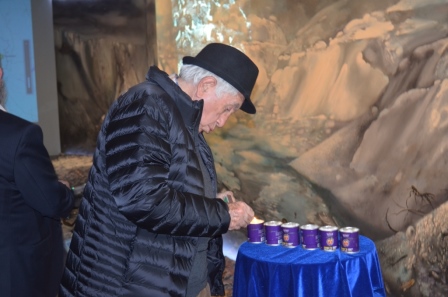 On October 14, 2015 Harry Triguboff, Australian businessman and philanthropist, Commander of the Order of Australia, visited Museum “Jewish Memory and Holocaust in Ukraine”. He is known for his large-scale projects aimed at returning Russian Jews to their roots.

The guided tour was held by Dilfuza Hlushchenko, Head of Research Department. In addition the tour, solemn ceremony dedicated to the 74 anniversary of the mass shooting of Jews in Dnipropetrovsk was held in Museum. Shmuel Kaminezki, Chief Rabbi of Dnipropetrovsk city and region, took floor at the ceremony. Oleksandr Fridkis, Executive Administrator of Religious Community, read the Memorial prayer for the Holocaust victims. In memory of the six million Jews killed during the Holocaust, six symbolic candles were lit.