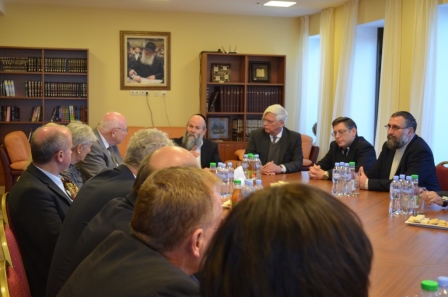 On October 7, 2015 “Menorah” Center hosted the events dedicated to the German Unity Day. During the visit to Dnipropetrovsk Bundestag representative delegation met Shmuel Kaminezki, Chief Rabbi of Dnipropetrovsk city and region, as well as visited Museum “Jewish Memory and Holocaust in Ukraine”. Dr Igor Shchupak, “Tkuma” Institute and the Holocaust Museum Director, participated in the meeting with German delegation where wide range of issues related to the current political situation in Ukraine and the world, as well as the current state of the Jewish community were discussed.

After meeting with the Rabbi, German delegation was invited for a guided tour around the Holocaust Museum conducted Irina Radchenko, the Museum employee.