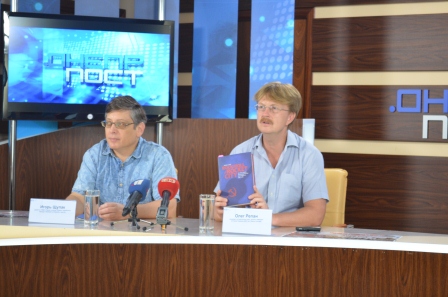 During the press-conference, two event within the framework of the Historical Club on August 16 were announced.

Pavlo Khazan, National Defense Foundation Chairman of the Board, will donate his family relic - binoculars. Pavlo's grandfather used them during World War II and now this thing became very useful for Pavlo, who participate in the war in Eastern Ukraine. Thus, events of the past are combined with the present.

The second event of the Historical Club is related to the unique research on famous American scholar. Sergei Zhuk, Professor of Ball University (USA), a native of Dnipropetrovsk, will present his book "Rock and Roll in the Rocket City" (published in English in the USA). In Soviet times "rocket and space" Dnipropetrovsk was closed city for foreigners. Nevertheless, in 1960-70s Western culture, especially in the form of music, movies, dances and clothing gradually penetrated through the "iron curtain". Using materials Ukrainian archives, diaries, memories, Prof. Zhyk revealed the question of spreading of Western culture among Dnipropetrovsk youth of Brezhnev era. In addition to interesting stories, participants will be able to listen to music of 1960-1970s and see some images of that time.