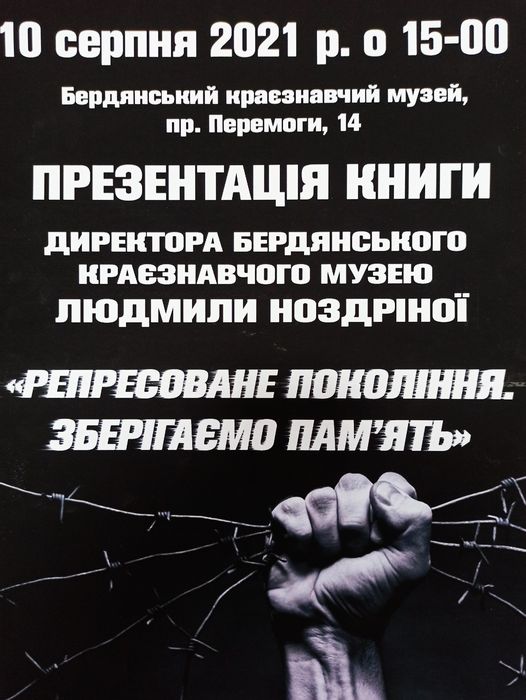 August 10 in the walls of the Berdyansk Museum of Local Lore was the presentation of the new book by the director Lyudmila Nozdrina "Repressed generation. Preserving memory". Officials, librarians, teachers, local historians, servicemen were present in the museum.

The author of the book told about how the idea to write about repressed residents of Berdyansk was born. L. Nozdrina presented architectonics of the book, focused on the fate of its brightest heroes. This is a family of former Fetter entrepreneurs, biologist G. Tse-Kononenko, Dean of the Faculty of Physics and Mathematics Berdyansk Pedagogical Institute Yu. Kara-Kurchi, scientist- ethnographer V. Kravchenko and others. They were all accused of anti-Soviet activities and punished by the Communists dictatorship. With the completion of an important project and the publication of the book congratulated the representative of the Zaporozhye regional state administration Pavlo Mialo, chairman of the Association of National Minorities of Naufal region Hamdani, Archpriest of the Orthodox Church of Ukraine Vitaliy Yurenko, local historian Yevhen Denisov and others. Scientific employee of the museum "Jewish Memory and Holocaust in Ukraine” Dr. Olena Ishchenko, who acted as a researcher consultant of the publication, drew the attention of guests to the value published personal documents (letters, memoirs) and catalog repressed residents of Berdyansk, whose documents are stored in the funds of the BCM and can become starting point for further systems research. O. Ishchenko noted the long-term cooperation of L. Nozdrina with Museum "Jewish Memory and Holocaust in Ukraine" and presented the latest to the Berdyansk Museum of Local Lore publication of the “Tkuma” Ukrainian Institute for Holocaust Studies.