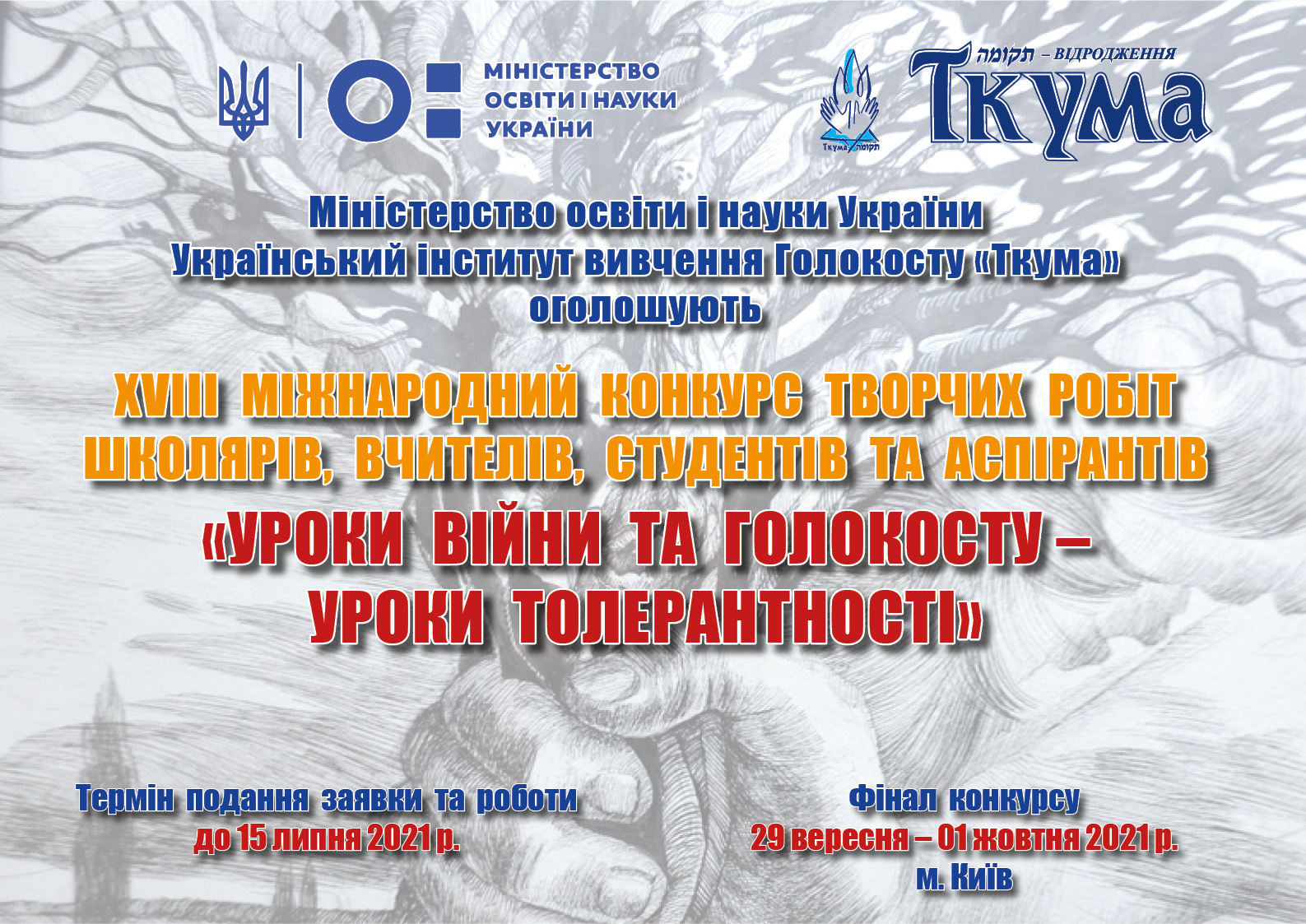 Ministry of Education and Science of Ukraine and “Tkuma” Institute announce

AIM OF THE CONTEST:

To involve teachers, schoolchildren, students and graduate students in the study, research, teaching of modern history, learning the importance of lessons in the history of war and the Holocaust and understanding these lessons to realize the problems of modern society, the need to create an atmosphere of humanism and tolerance.

Participants in the Contest can be representatives of Ukraine and other countries:

- class teachers and organizers of educational work of secondary schools;

Deadline for application and work submission – until July 15, 2021.

Summing up, awarding the winners and laureates of the contest – October 6-8, 2021

ILLIGIBLE WORKS FOR THE CONTEST:

INDICATIVE TOPICS OF THE CONTEST WORKS:

3. Babyn Yar as a place of memorialization. History and modernity.

4. Babyn Yar of the USSR. A place of shared memory and resistance to totalitarianism.

5. Babyn Yar and the preservation of Jewish identity.

7. Interethnic policy of the UPR and the reaction of ethnic groups to it.

8. Advantages and disadvantages of the national policy of Hetman P. Skoropadsky.

10. “Babyn Yars” of Ukraine – places of mass extermination of Jews.

11. Lessons of World War II – a warning to humanity.

12. The historical significance of the Victory over Nazism.

14. Stockholm Forum in 2000 to commemorate the Holocaust.

15. The Ukrainian people in World War II: the Nazi genocide and the Resistance Movement.

17. Genocides of the 20th century and their devastating impact on human development.

18. The nature of genocide against peoples: lessons of the 20th century and their consequences in the 21st century.

19. The “Jewish Question” in the national policy of the Bolsheviks / Ukrainian governments / White Guards during the Ukrainian Revolution.

20. Operation “Vistula” and its impact on the formation of the Ukrainian community in Poland in the second half of the 20th century.

27. Ukrainian nationalism and the “Jewish question” during the Holocaust.

30. “Nazi machine of destruction”: mechanisms of action and counteraction to genocide.

31. Ukraine under the influence of the double terror of Nazi Germany and the Stalinist regime.

32. Ukrainians – the Righteous Among the Nations.

33. The role of spiritual leaders of Ukrainians and other peoples in critical periods of trial.

34. International assistance during the tragic trials of World War II.

36. Interreligious tolerance as a manifestation of moral and spiritual choice.

37. International experience of responsibility for denying the facts of genocide in history.

38. Activities of modern international organizations, state institutions and public organizations of Ukraine to preserve the memory of the Holocaust and prevent genocide in the future.

39. Historical lessons of the Holocaust and modern problems of tolerance.

40. Propaganda as a weapon of totalitarian, authoritarian regimes to justify genocide and military aggression: from Goebbels to modern models.

41. Problems of studying the history of World War II and the Holocaust in the modern war against Ukraine.

More details on the participation can be found in the Regulations of the Contest  here.