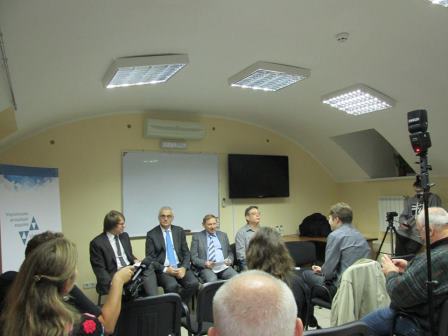 The participants in the discussion were Charles Small, the Director of the Institute for the Study of Global Antisemitism and Policy (New York); Zeev Khanin, Chief Scientist of the Ministry of Immigrant Absorption of the State of Israel (Jerusalem); Dr Igor Shchupak, "Tkuma" Ukrainian Institute for Holocaust Studies and Museum "Jewish Memory and Holocaust in Ukraine" Director. Vitaly Chernoivanenko, President of the Ukrainian Association of Jewish Studies, moderated the event.

Hall of the Office of Jewish Studies programs of the National University of "Kyiv-Mohyla Academy" became a platform to discuss new Antisemitism in Europe and Ukraine. What is Antisemitism in the modern world? Does it become primarily an academic issue or does it continue to influence political and social life of majority of countries? Does it change with time? Is the conversion of Antisemitism into component of public policy possible in an era when Jews are not a "state within a state"? These and other questions were in the focus of of researchers. Zeev Khanin and Dr Igor Shchupak in their speeches touched upon the topic of organized anti-Israeli propaganda, Islamic extremism, changes in the daily lives of European cities.