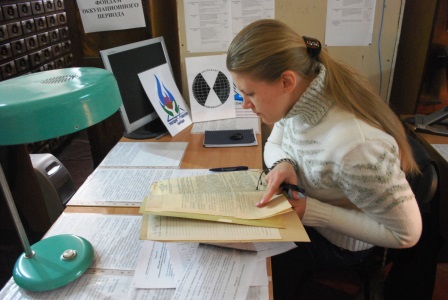 During December 13-23, 2016 within the framework of “The Tragedy of Roma People and the Memory of It in Ukraine, Moldova, Poland and Germany” “Tkuma” Institute research associates conducted search and research work in archival and scientific institutions of Odesa and Chisinau (Moldova).

Thus, during the several days in the State Archive of Odesa region research associates processed many of archival cases containing materials on the topic of the genocide of the Roma during the Second World War. Many documents were written mostly in Romanian, as Odessa, like some other regions of Ukraine, was part of Transnistria Governorate, which was under the rule of Romanian authorities. However, the language barrier didn’t become an obstacle in the research of orders, instructions, and secret letters of Romanian occupation authorities on the situation of the Roma community in the region. Deportations, tortures, terrible social conditions (including disease and hunger) were the main features of the Roma genocide during World War II.

During a research-trip to Odessa meetings with Dr. Pavlo Kozlenko, director of the Holocaust Museum in Odesa, and Vladimir Chaplin, research fellow at Odesa Jewish Museum, were conducted.

In Chisinau researchers met with Dr. Ion Duminica, head of the Department of Ethnic Minorities of the Academy of Sciences of Moldova, which is one of the leading Moldovan experts on the topic of Roma genocide. Dr. Ion Duminica provided scientific advice regarding the research of this topic in Moldova, the current state of the historiography of the subject and gave a variety of materials that will help in the creation of exhibition in the Holocaust Museum.

Consultations were also conducted with Dr. Ion Varta, Director of the State Archival Service of the Republic of Moldova, and Dr. Veaceslav Lupan, Director of the National Archives of the Republic of Moldova. They both provided assistance in the work the materials contained in National Archives, where there are a lot of documents of I. Antonescu regime, in particular, about the deportation of Roma to Transnistria.

“Tkuma” Institute research associates also visited the Rome National Center and talked to representatives of Roma community of Moldova. In particular, agreement was reached to transfer some materials to the Holocaust Museum, which will be useful for creation of the exhibition on the history of the Roma genocide.

During the visit to the National Library of the Republic of Moldova “Tkuma” Institute research associates identified and analyzed scientific literature on the Holocaust, the occupation regime of Romania, and the tragedy of Roma people.

The information and materials collected will be used to create a mobile and museum exhibition dedicated to the genocide of the Roma during the Second World War.