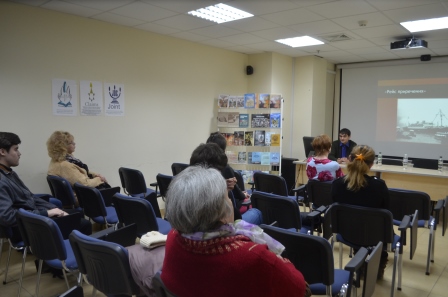 The session was conducted by Dr. Iegor Vradii, Head of Museum and Research Department of “Tkuma” Institute and the Holocaust Museum. Within the event participants reviewed and discussed documentary on the Holocaust history “Path to Nazi Genocide”. The film, created by Holocaust Memorial Museum (Washington, USA) with the sound track in Ukrainian made by Information Center of the UN Office in Ukraine, is a brief overview of the history of the Holocaust and the facts that made “final solution of the Jewish question” possible.

Due to the film participants had an opportunity to seerare footage exploring origin of Nazism, consolidation of power in Germany, the Nazi racist ideology, propaganda, persecution of Jews and other civilians. The film also outlined the path by which the Nazis and their collaborators led a state to war and to the murder of millions of people, including 6 million Jews.

The session aroused great interest of the Sunday Club participants, who highlighted the importance of using the film in education, primarily during history lessons at schools and universities, and stressed the need to study the history of the modern world.