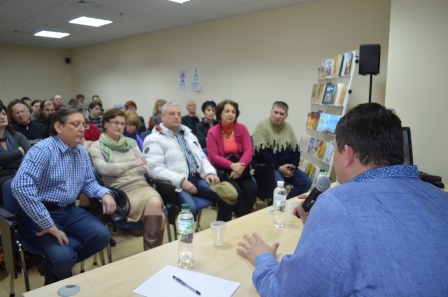 The session started with dialogue, everybody had the opportunity to ask questions to the authors of the exhibition “Ukrainian World War II” opened on the same day at Museum “Jewish Memory and Holocaust in Ukraine”. Have there been any attempts of the Ukrainian academic community to criticize the exhibition? Will it be right to call Komsomol tours of the post-war years “hidden” deportation of Ukrainians? Can we consider the attitude of the Soviet military leadership to “Black Infantry” as hidden genocide? What were the difficulties during the preparation of the stand devoted to the deportation of Crimean Tatars? Did Bukovina Kuryn participate in the extermination of Jews? – These and other issues were the most interesting to the participants of the Historical club.

After the beginning of hostilities partial deportation of “undesirable” peoples took place. Above all these were Poles, Ukrainians, part of Jews from Western Ukraine, as well as residents of the Baltic countries and Bessarabia. In 1941 the Soviet Union started deportations of Germans. Gradually, after the counterattack of the Soviet troops, the Soviet Union switched to deportation of so called “condemned” peoples, namely the nations who were charged with collaboration. Kalmyks, who were deported from the Republic of Kalmykia, became the first in 1943. Then deportation affected the peoples of the Caucasus, including Chechens and Ingush people; in 1944 evictions from Crimea began.

The lecture aroused great interest of the audience that was proved by the active discussion at the end of the session.