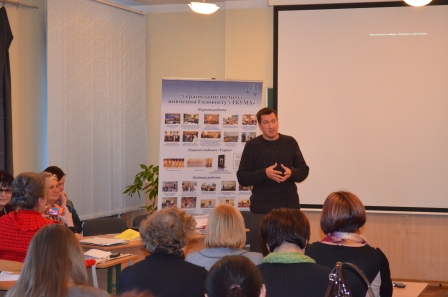 During the meeting, Iryna Piskariova, "Tkuma"  Institute Educational Department Head, presented opportunities and achievements of "Tkuma" Institute and its partners in the field of teaching Holocaust history, international relations in Ukraine, the events of World War II, etc. Teachers also learned about the conditions of participation in the next XIII International Creative Works Contest for Pupils, Students and Teachers “Lessons of War and Holocaust – Lessons of Tolerance”, organized by "Tkuma" Institute under support of the Ministry of Education and Science of Ukraine. Iryna Piskariova noted that the Final event of XIII International Contest would be held in 2016 in Kyiv and would be a part of major events dedicated to the 75 anniversary of the Babyn Yar tragedy.

Valentyn Rybalka, "Tkuma" Institute Research Associate, introduced the new editions prepared by "Tkuma" Institute and the Holocaust Museum staff. Participants were especially interested in the Album of Photos and Documents "Nazi New Order in Ukrainian Cities", that prompted the debate on the role of photographs in the World War II and the Holocaust history studying and teaching.

Yegor Vradiy, "Tkuma" Institute Research Associate, presented a report on a topical subject for each History teacher - "Historical Myths and Their Role in Shaping Democratic Society"; he demonstrated the mechanism of creation and functioning of historical myths in the life of various countries and the ways to deconstruct them.

Summing up the session Iryna Oliynyk, Methodologist of Informational and Analytical Methodological Center of Department of Education and Science, Youth and Sport of Zaporizhzhya City Council, noted that Teachers' Debate Club once again demonstrated its potential as an informal platform for teachers' experience exchange on topical issues in the field of history education and expressed the wish to involve teachers of the whole region to this project.