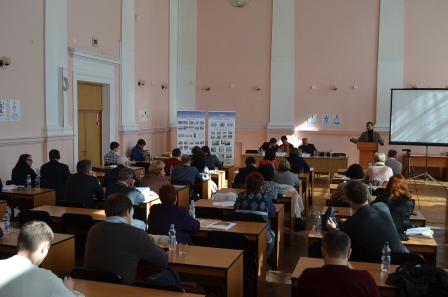 On April 27–29, 2016 Kyiv hosted All-Ukrainian Scholarly-Practical Seminar “Creative Work, Methodological Developments, Author Training Manuals and Their Use in the Teaching WWII and the Holocaust History” for teachers organized by “Tkuma” Ukrainian Institute for Holocaust Studies, Ukrainian Institute of National Memory under the support of the Ministry of Education and Science of Ukraine.

The seminar lasted three days and focused on wide range of questions related to World War II and the Holocaust history as well as implementation of new ideas and approaches in teaching these topics.

Presentation by Dr. Igor Shchupak caused general attention of participants. The topics he touched during presentation dealt with author programs, textbooks, methodological developments and the use of them during teaching World War II and the Holocaust History.In most countries it was the Holocaust history that became the key to understanding many historical processes that preceded it and took place immediately after the Second World War. The analysis of new educational, methodological, multimedia toolsin World War II and the Holocaust history teaching, conducted by Dr.Shchupak showed that history teaching helps students not only in the accumulation of a certain amount of knowledge, but also contributes to real progress in tolerance education and development of critical thinking of young generation.

It is essential that the seminar became the discussion platform where teachers and methodologists were able to demonstrate and discuss the results of their methodological developments on history teaching, both during the school lessons and in the form of extracurricular education. Thus, Oleh Rudy, teacher-methodologist (Khmelnytsky) presented his multimedia manual on World War II and the Holocaust History. Oleksandr Kononchuk (Rivne), Oleksandra Bykova (Kirovohrad) demonstrated how video testimonies and other visual sources can be used while teaching the history of World War II and the Holocaust, the multinational culture of Ukraine, etc. Special attention was paid to the presentation by Rayisa Krayeva (Odesa). According to her, history can be converted from a classic lesson to interesting and unique process if it taught in the form of quest games based on the principles of social and role modeling.

No one was left indifferent after very emotional and substantial speech by Iryna Piskariova, “Tkuma” Institute Educational Programs Coordinator, dedicated to increasing of students’ interest to learning World War II and the Holocaust history by using museum exhibitions. Speaker managed to show a palette of possibilities of effective work with pupils and students on the basis of Museum “Jewish Memory and Holocaust in Ukraine”. Thematic tours, the work Museum funds, museum lessons on the Holocaust and World War II history, consideration of inter-ethnic relations in the Ukrainian lands and multinational culture of national territories – this is only a partial list of problems Ukrainian students are dealing with on the base on the Holocaust Museum exhibition. Speaking of new and creative ways of increasing the curiosity of students to the past of their country, I. Piskariova demonstrated the possibility of such forms of work as the “Wall of Remembrance. Family history – the history of the country” when children are involved in research work and consider the historical processes and phenomena not only on the global and national examples, but also through microhistory – on the examples of their parents, grandparents, etc.