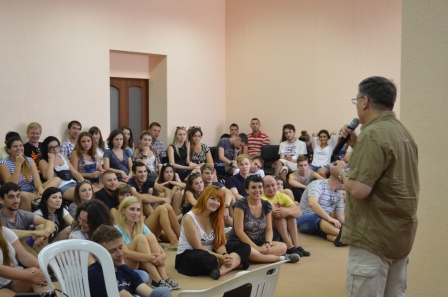 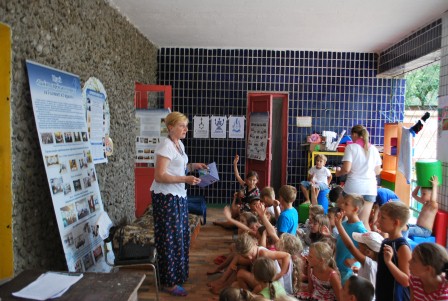 On August 13-14, 2015 Iryna Radchenko and Lyudmyla Sandul, "Tkuma" Institute and Holocaust Museum Research Associates, conducted lectures and psychological trainings for participants of the summer camp "Yuvileynyi" in Zaporizhzhya region.
The program was organized in cooperation with Zaporizhzhya Jewish Community Center "Mazal Tov" led by Inesa Nosenko.
During the lessons organized by "Tkuma" Institute, special attention was paid to discussions and interactive lectures on the history of Jewish nation and the Holocaust. Using different visual sources, in particular, photos, "Tkuma" Institute workers told children about different behavior of people during the Holocaust (collaboration, bystanders, Righteous Among the Nations) and reasons for their actions.
Series of psychological training for children of different age groups were conducted with the aim to unite the camp participants in a friendly family. During the lesson Lyudmyla Sandul and Iryna Radchenko used exercises in the form of games for overcoming the psychological barrier when communicating, adaptation to society, and, in general, for a greater communication with each other. Also to create a closer relationship between adults and children as well as to develop certain skills of creative behavior "Tkuma" Institute staff read story "What Did Our Nation Survive: Story of Shoah".
Overall, "Tkuma" Institute representatives conducted the combined classes that included full of facts lectures and psychological games and exercises allowing children to understand the complex topic of the Holocaust. The experience gained will be used by "Tkuma" Institute and Holocaust Museum staff during the educational programs for children. 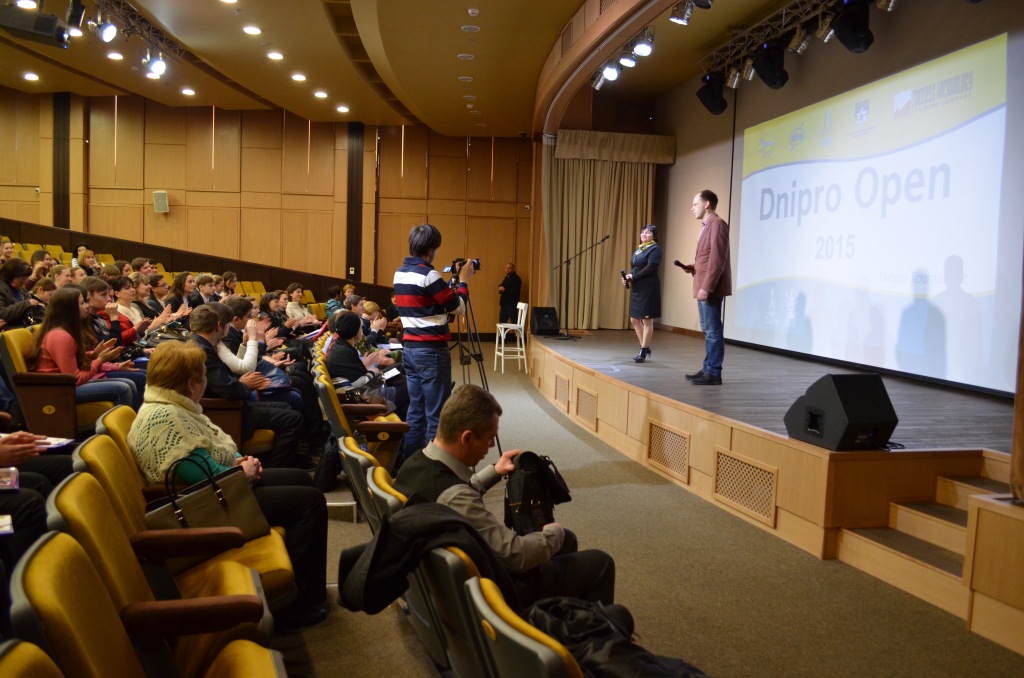 On February 20-22, the Annual Open Tournament “Dnipro Open”, conducted by NGO “New Vision” since 2009, was held in Dnipropetrovsk. “Tkuma” Institute has been supporting debate tournament for pupils and students three years in a row, so the opening event traditionally took place at the “Menorah” Center in the “Sinai” concert hall. Here the first debate workshops and guided tours around Museum “Jewish Memory and Holocaust in Ukraine” for tutors and debaters took place.

Holocaust Researches Presented at the Small Academy of Sciences 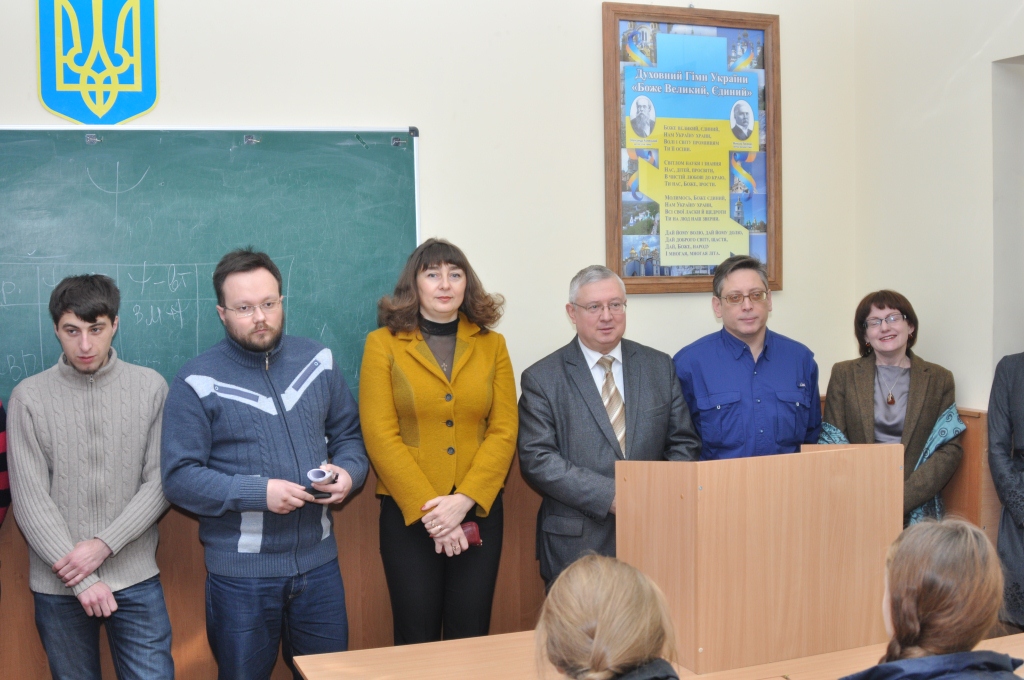 On February 6-7, the History faculty of the Dnipropetrovsk National University conducted the second stage of the Ukrainian Competition and Defense of the Research Works of the Students-Members of the Small Academy of Sciences of Ukraine. This year “Tkuma” Ukrainian Institute for Holocaust became a partner of this competition.
Dr. Igor Shchupak, Institute Director, and Denis Shatalov, Institute Research Associate, became the members of Expert Committee and participated in the defense in the sections “History of Ukraine” and “Local History Studies”.
In his speech, Dr. Shchupak emphasized the need of studying the tragic events of the 20th century as the basis for formation of tolerance in the society. The Institute Director told students and their curators about the prospects of cooperation between young researchers and “Tkuma” Institute, including the possibility of taking part in national and international seminars and competitions. In addition, “Tkuma” Institute plans to publish the collection of the best works.

Museum Lesson for the Pupils of Petrykika School 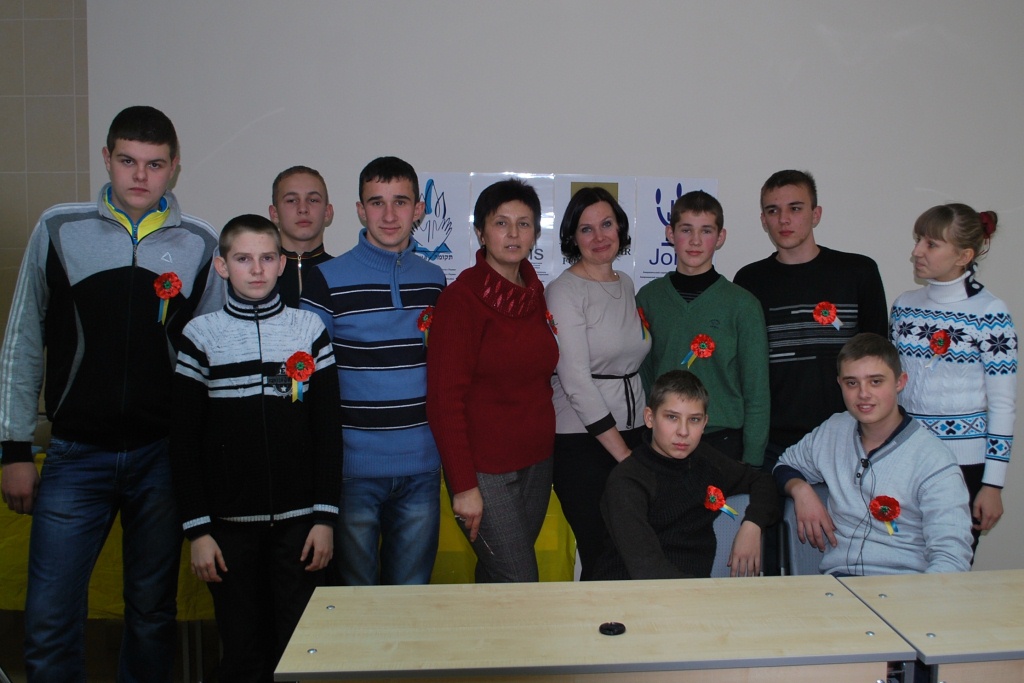 Museum lessons for pupils held by “Tkuma” Institute and Museum “Jewish Memory and Holocaust in Ukraine” become more and more popular. Teachers of Dnipropetrovsk and the region introduce such lessons to their pupils.

Read more: Museum Lesson for the Pupils of Petrykika School