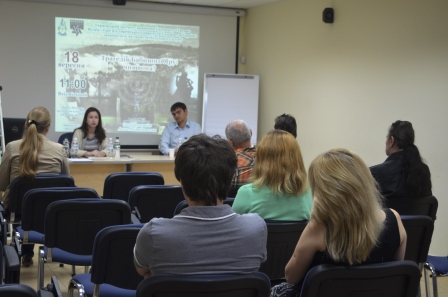 On September 18, 2016 “Tkuma” Institute and the Holocaust Museum organized and conducted the Sunday Club session dedicated to forming and preserving the memory Babyn Yar tragedy. The session was conducted by Anna Medvedovska, “Tkuma” Institute Research Associate.

Today Babyn Yar is the world symbol of the Holocaust. In the autumn of 1941 within two days nearly 34 thousand Kyiv Jews were killed here. However, during the war not only Jews were killed and buried at Babyn Yar. Within two years of the German occupation until November 1943 group of people who were also regarded as enemies of the Nazis such as Roma, Ukrainian nationalists and others were shot and buried here. Number of victims reaches at least 100 thousand people, more than two-thirds of whom were Jews.

How the memory of Babyn Yar was formed and changed in the Soviet Union? What is the Babyn Yar situation in Ukraine today? These and other issues were discussed by the Sunday Club members.