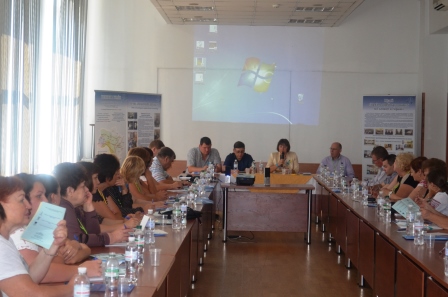 On July 17-19, 2015 Lviv hosted All-Ukrainian Pedagogical Seminar "World War II and Holocaust History Teaching Problems During the Modern War against Ukraine". The event was organized by the Ministry of Education and Science of Ukraine (MESU), "Tkuma" Ukrainian Institute for Holocaust Studies, Museum "Jewish Memory and Holocaust in Ukraine" and Ukrainian Institute of National Memory. The event became possible due to financial support of the Conference on Jewish Material Claims Against Germany "Claims Conference", American Jewish Joint Distribution Committee and the Dutch Jewish Humanitarian Fund.

The program of the seminar included not only discussions and experience exchange, but lectures by famous Ukrainian and foreign scholars on current problems of WOrld War II and Holocaust history teaching.

Dr Igor Shchupak presented his new textbook on the Middle Ages History for pupils of the 7 form and multimedia e-book "World History. World War II and the Holocaust" for pupils of the 11 form. According to school curricula, History course in the 11 form starts with the toopic "World War II" and Dr Shchupak noted the teaching this topic is methodologically difficult. "Political speculations about World War II and the Holocaust history and memory are used for integration of post-Soviet and anti-Ukrainian ideology, myths and stereotypes into the consciousness of Ukrainian society in order to split it. This problem is particularly relevant  today, when Ukraine suffered military aggression of the neighboring country". That is why balanced approach to teaching World War II and Holocaust history is extremely important.

As a continuation of the topic Oleh Pavlyshyn, Associate Professor of the Department of Modern History run by Ivan Franko Lviv National University, presented his report on controversial problems of teaching  World War II history.

At the end of the first day, teachers met Sergei Zhuk, Professor of Ball University and native of Dnipropetrovsk, and talked about Ukrainian soviet society in the second inter-war period(1945 – 2014).

The second day of the seminar started with the lecture and guided tour around Andrey Sheptytsky Lviv National Museum conducted by Volodymyr Aleksandrovych, Doctor of Historical Sciences, Professor of Warsaw University. Another key-event of this day was "round table" on modern requirements to training and methodological basis for history teaching.

The summing up of the seminar was carried out within the round-table where teachers got an opportunity to exchange their experience in teaching Holocaust history at schools and discussed development of new curricula and textbooks.